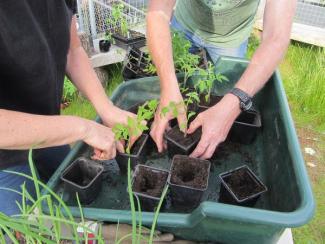 Bradford YMCA is commemorating the centenary of the outbreak of World War One by exploring the YMCA's involvement in the support of soldiers and people in Bradford in 1914.

BEES is contributing to the project by helping to create a mobile Tea Hut (see below) and planting a Ration Garden at Culture Fusion.

Would you like to be involved with the garden? ...please get in touch. We will record progress in the garden in the Ration Garden blog

Here are some dates for Ration Garden growing sessions...will be good to see you at any of these.

Wednesday 23rd April - we will be planting seeds, including some to take home, at Forsters Bistro by the Mirror Pool. You can also bring your WW1 artifacts to show experts. Event runs 10-4pm. We will be there for a couple of hours 11-1pm (tbc)

Wednesday 7th May 4-7pm at Local Studies Library, Princes Way, BD1
Learning from library staff how to research about food and other aspects of WWI

A sample of seeds and potatoes for our Ration Garden

The first seeds we have aquired are from the Heritage Seed Library at Garden Organic.

A full list of varieties and information about them will be produced soon.

Bradford YMCA have received £45,000 in Heritage Lottery Funding to mark the 100th anniversary of the First World War – a conflict that affected more than 37,000 lives in our city alone.

With the veterans of that war all but gone, local young people will keep the story of Bradford’s heroes alive as they recreate the YMCA Tea Hut, plant a ration garden and research Bradford’s WW1 history. Read More

What was a Tea Hut?
Tea huts varied from village halls and tents to sand-bag shelters. They formed a network of relief stations that stretched from Bradford to the battlefields.

In just ten days from the outbreak of war, the YMCA had set up 250 safe places for soldiers on their way to the Front. They offered tea, food, warmth and friendship at railway stations, ports and forward bases from which thousands of men stepped into the unknown. The number of YMCA huts grew into the thousands as the war went on and spread across the world.

One hundred years later, the replica tea huts will again offer refreshment, friendship and support as well as the chance to learn about our shared First World War history.