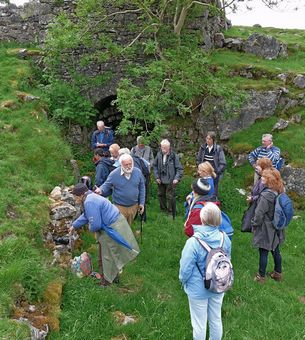 Learning About The Lime KilnToday’s BEES outing had a different feel as we visited Lower Winskill Farm at Stainforth where we were led on a tour of the farm by Tom Lord, the farmer who is also a local historian and achaeologist. A full minibus parked in the car park in Stainforth at about 750ft above sea level and we walked up the lane and through fields on limestone to Lower Winskill Farm at just under 1000ft whilst Tom showed us a lime kiln and told us about the history of the farm and area and how the farm operates today – to a large extent by not actually farming but by preserving pastures and meadows in a traditional way.

Smearsett Scar and Ingleborough with head! Farm buildings have been cleverly converted into classrooms, workplaces and galleries in which we were able to escape the rain which arrived at lunchtime. We had time then to look at the very imaginative gallery which has been created for a forthcoming ‘Open Studios’ event when resident sculptor Sarah Smith and artist Margaret Uttley will display their works. Some of Sarah's work is also exhibited outside in the fields around the farm. The warning on the BEES programme - ‘because of the elevation warm and waterproof clothing is needed, even in June’ – was very timely as the rain continued to fall and the wind continued to blow as we continued our tour after lunch. A decision to abandon the high ground and seek more sheltered pastures came before the rain passed over and we enjoyed a leisurely stroll back to the minibus in Stainforth in much brighter weather.

Chimney Sweeper The sunshine encouraged winged creatures to fly and we saw many small heath butterflies and chimneysweeper moths. John’s joining the group has added another dimension to our combined knowledge and he was able to identify two northern brown argus butterflies – the first of the year at Lower Winskill. Numerous plants and ferns were seen including moonwort and even a few bluebells still flowered at the high altitude. The high Dales do not hold a great variety of birds and we only recorded about a dozen, which included the locally common wheatear and meadow pipit, but we did enjoy superb views to Ingleborough and Penyghent and beyond. We returned to the minibus enthused by what we had seen and been told but with a slight hint of sadness that farms such as Lower Winskill are no longer agriculturally viable but have to rely on subsidies in order to preserve the traditional landscape.