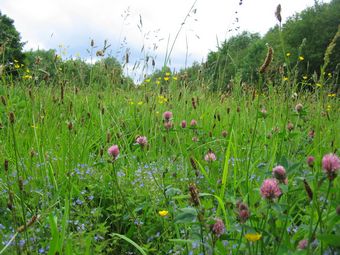 Meadow in bloom Today we carried out some much needed maintenance on the site. At first we collectd litter and fly tipping, which included a mattress, carpet, two trollies, several tyres and items from the pond. We then split into smaller work groups, a group trimmed the hedge that we had previously laid which showed good signs of regrowth, two areas of japanese knotweed were tackled, ensured that the paths were open by cutting back the vegetation, repaired several sections of wall and pulled up himalayan balsam. Considering the amount of littering and fly tipping that we removed it was encouraging to see a moorhen on a nest and the meadow in fantastic bloom which the photo shows.

Today we worked with 21 volunteers.

Click here to see other photos of the site.