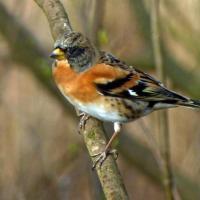 As we left Bradford the bulk of the chatter was that we hadn’t expected rain. Thankfully by the time we reached Old Moor, near Barnsley, the skies had cleared and we had what could be considered good weather for the beginning of March (whatever that might mean these days).

The Bird Garden and the Tree Sparrow Farm proved to be a very successful place to begin and end our visit. I think the highlight for all were the Bramblings, both male and female, seen in both places. But we were equally pleased to have great views of Yellowhammer, Tree Sparrows, Reed Buntings, Goldfinches, Chaffinches, Bullfinches and Blue, Great and Long-tailed Tits. A colourful bunch, all attracted to the bird feeders.

We then went to the Bittern Hide and the Reedbed Hide. Unfortunately no bitterns were seen or heard, though there have been recent reports of one male booming, another warming up his vocal cords and a female has been seen. Maybe next time for us.  Instead we watched Gadwall, several Little Grebes, a small flock of Pochard and some Shoveler skulking in the reeds.

Returning past the visitor centre we visited each hide along the route. From the Family Hide we picked out a Mediterranean Gull  and a Common Gull amongst the raucous Black-headed gulls. At the Field pool west hide we saw a solitary Black-tailed Godwit and a larger flock of Shoveler, which took to the air several times only to return to the same spot. Wigeon were grazing on the bank opposite the hide.

The water levels at Wath Ings hide were higher than most of us remembered them being on previous visits. The RSPB staff explained that they vary the water levels across the Dearne Valley, to ensure the health of the habitats is maintained. When the areas are flooded it brings nutrients to the surface allowing vegetation to regrow once the levels are reduced again. Without this process the spits would get depleted and the area won’t support as many birds. Once the birds begin to nest they will cease to fluctuate the water levels.

A quick revisit to the Tree Sparrow hide for a last look at the Bramblings (and their friends) and a good view of a Redpoll at the Bird Garden feeders before heading home. Despite a bit of congestion on the M62, the journey home was relatively smooth. Thanks to Stuart for taking over my driving duties.